Among those with responsibility for managing an organization’s accounts receivable or collections activities, there is likely some familiarity with available invoice financing solutions such as supply chain financing, factoring or dynamic discounting.  The notion of getting an outstanding invoice paid early in exchange for a small percentage has grown in acceptance in the last several years.  The findings from our 2017 Perceptions Study suggest that this is indeed the case, as 48% of respondents were open to accepting early payment of their invoices in exchange for a small percentage while 40% said they were not open (12% were not sure). While this may not be surprising, a more revealing sentiment regarding the change in appetite for invoice financing can be found by digging a little deeper in relation to how that financing might be provided.  In two separate studies (2015 and 2017), we asked respondents if they were open to early payment provided directly by their customer as well as whether they were open to early payment provided by a third-party – without customer involvement.  By asking the question this way, most respondents were opposed to taking early payment in 2015 – regardless of how it was provided, while most were open to the idea in 2017. 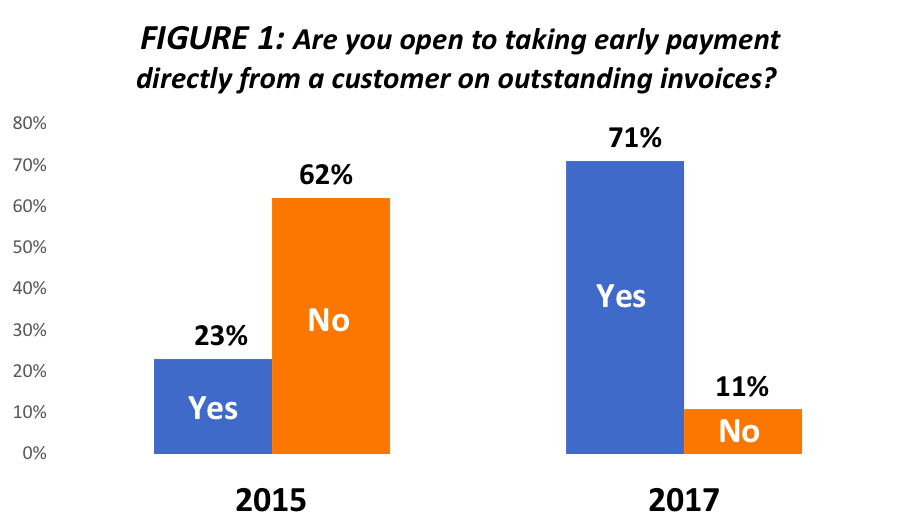 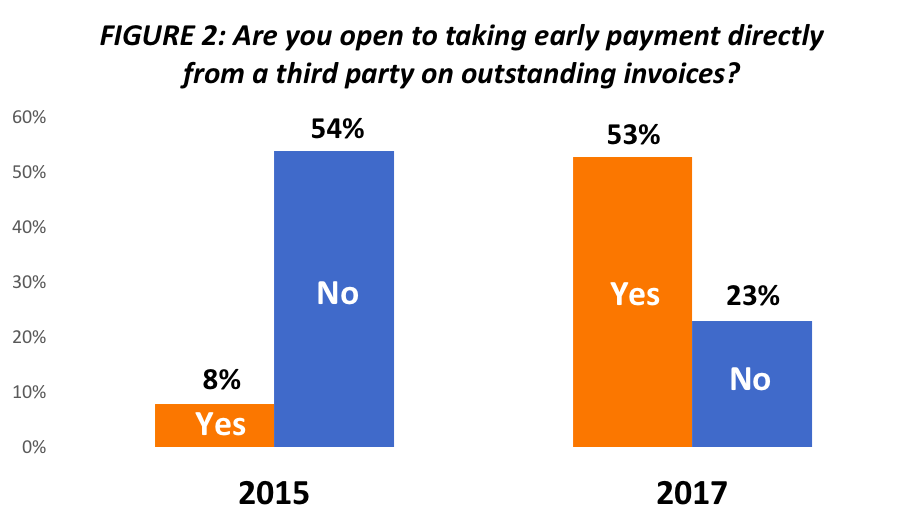 Why the change in interest?

As opposition to early invoice payment diminishes – especially if offered directly from customers – it’s worth discussing what might be behind this shift.  We believe there are three core issues driving this change.

The great recession from almost 10 years ago has impacted businesses a number of ways.  Depending on who you talk to, there was never a full economic recovery – at least the kind we’ve become accustomed to – after the recession.  There were lingering challenges in terms of real economic growth, employment and availability of business financing that appeared to slow any progress.  During the height of the recession, supplier organizations saw customer orders shrink, revenue drop and receivables placed at risk.  Once the worst of the recession was over, suppliers saw that some customers were still going out of business, even in the midst of a perceived recovery.  With the new normal being receivables in perpetual risk, more suppliers began to consider alternative methods of financing, especially if traditional financing was hard to come by. Factoring and supply chain financing were options more suppliers had at their disposal and, in the case of supply chain financing, customers were more than willing to participate.

In the wake of the recession, once customers were able to regain their financial footing, one holdover for customers was the practice of extending payment terms to their supply chain.  Although the recession had been deemed “over” (again, depending on who you talk to), the new normal for customers was the opportunity to make longer payment terms permanent.  If 30-day terms were standard before the recession, 45, 60 and even 90 days were now commonplace.  This is simply driven by the fact that customers want to either hold onto their cash longer (enabled by partnering with a supply chain financing or dynamic discounting solution provider) or pay less on approved invoices (generating additional cash at the end of the year from accumulated discounts).  Either way, the customer can improve their bottom line simply by leveraging an early payment option the supplier might be open to.

With more customers interested in offering invoice financing due to the revenue it generates, coupled with more startups coming on board with newer technology, supplier organizations are being inundated with opportunities to take early payment now in order to increase cash flow and improve working capital.

But, it’s not just new technology and startups getting in on the act.  Supply chain financing (which has been around for a while) and factoring (which has been around just as long or longer) are getting second looks.  The notion of taking early payment is no longer seen solely as a desperate measure by a desperate supplier but more as a strategic option for operating the organization at peak efficiency.

What does this mean for supplier organizations that have a critical eye on the bottom line in light of all of the early payment solutions available to them?  Each company must make decisions about sales, customers and outstanding receivables in ways that make sense to their organization.  With that said, companies can leverage invoice financing strategically to address specific issues in their cash flow.  Such strategies should be viewed as complimentary to sound credit management, invoicing and collections practices, not as a primary means to fund the business.  In other words, should invoice financing be used for every invoice in every instance?  Probably not.  But, if leveraged in a way that maximizes cash flow at select times, early payment on outstanding invoices can be a savvy option.  No wonder more organizations are open to it.

Ernie Martin is Founder and Managing Director of Receivable Savvy. He brings over 25 years of experience in financial supply chain management, marketing and communications and draws upon his extensive experience to share knowledge and best practices with AR professionals. He currently chairs the Vendor Forum of the Federal Reserve Bank of Minneapolis and his resume includes time at several well-known brands and companies such as Tungsten Network, Delta Airlines, CIGNA Healthcare and Georgia Pacific as well as a number of years as an independent consultant.

We use cookies on our website to give you the most relevant experience by remembering your preferences and repeat visits. By clicking “Accept All”, you consent to the use of ALL the cookies. However, you may visit "Cookie Settings" to provide a controlled consent.
Cookie SettingsAccept All
Manage consent

This website uses cookies to improve your experience while you navigate through the website. Out of these, the cookies that are categorized as necessary are stored on your browser as they are essential for the working of basic functionalities of the website. We also use third-party cookies that help us analyze and understand how you use this website. These cookies will be stored in your browser only with your consent. You also have the option to opt-out of these cookies. But opting out of some of these cookies may affect your browsing experience.
Necessary Always Enabled
Necessary cookies are absolutely essential for the website to function properly. This category only includes cookies that ensures basic functionalities and security features of the website. These cookies do not store any personal information.
Non-necessary
Any cookies that may not be particularly necessary for the website to function and is used specifically to collect user personal data via analytics, ads, other embedded contents are termed as non-necessary cookies. It is mandatory to procure user consent prior to running these cookies on your website.
SAVE & ACCEPT